A zebrafish model of tuberculosis infection

PhD students in biological science programs often complete lab rotations prior to choosing a thesis lab. Commonly, each student completes three rotations, each 8-12 weeks long, similar to an internship. My rotation in the Tobin Lab was exciting because I got to combine my interests in animal models and infectious disease (see below). The Tobin Lab studies tuberculosis (TB), a bacterial infectious disease of the respiratory system. While not common in the United States, TB has historically been and remains a major killer, with over 1 million TB deaths each year (compare to 55 million total human deaths per year). Zebrafish are an excellent model to study TB. The way the bacteria grow in human cells, forming a ball of dead cells called the granuloma, is mirrored well in the zebrafish. Furthermore, zebrafish are genetically similar to humans and the larvae are optically transparent, allowing for live imaging.

In my rotation, I explored the mechanisms by which a component of the Mycobacterium cell wall induces the formation of blood vessels in the zebrafish, following up on the work of Oehlers et al. (2015). I injected fish with this chemical (TDM) and looked at the formation of abnormal blood vessels using fluorescence microscopy. This was possible because the blood vessels of these fish were labeled with enhanced green fluorescent protein (eGFP), and because the blood vessels in the trunk of the fish normally form a very structured, ladder-like pattern, making it easy to see when there is any abnormal development. By repeating this process for fish lines in which genes we suspected may be involved in the formation of these blood vessels had been knocked out, I was able to test which of these genes were required for these vessels to form.

The fight between C. albicans and human immune cells

For my undergraduate thesis (aka Major Qualifying Project aka MQP), I worked in the Rao Lab at WPI studying interactions between Candida albicans and macrophages. C. albicans is a yeast (a type of single-celled fungus) that can be found in many healthy adults, but can also cause opportunistic infections. These include yeast infections, oral thrush, and life-threatening bloodstream infections (candidemia). Macrophages are a type of white blood cell that eat pathogens. However, C. albicans may escape phagocytosis by forming filaments and expressing enzymes to damage the macrophage. My project focused on understanding how macrophages recognize C. albicans using pattern-recognition receptors (PRRs) and how C. albicans fights back with these enzymes, particularly a class called secreted aspartyl proteases (SAPs). In my experiments, I used macrophages and C. albicans in which the genes encoding certain PRRs or SAPs had been knocked out, or deleted, and quantified C. albicans survival over time when the two were grown together.

This microscope image shows C. albicans (the smaller cells) and macrophages in co-culture after 3 hours. In the center of the image, at least one C. albicans cell has clearly been phagocytosed (engulfed) by a macrophage, but is growing out by filamenting.

My full MQP report can be found here, or download my MQP poster summarizing my results. 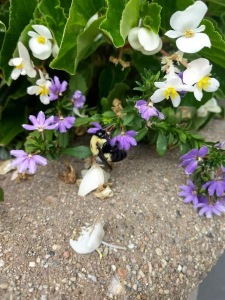 I got my start in biological research in the Gegear Lab studying brain-behavior relationships in bumblebees using the common eastern bumblebee Bombus impatiens as a model organism. Bees are ecologically important pollinators, and they are dying off at an alarming rate. During my time in this lab, I was part of two major projects testing the effects of sub-lethal pesticide dosing and simulated infection on bees’ ability to forage. We quantified foraging ability by measuring variables like time spent on each flower, time spent flying between flowers, and percent correct flower choices.

See these two exciting papers by Dr. Melissa Mobley, my graduate mentor during my time in the Gegear Lab:

One size does not fit all: Caste and sex differences in the response of bumblebees (Bombus impatiens) to chronic oral neonicotinoid exposure